Behind the Scenes Cover Shoot

Given the hoo-ha that surrounded Jonathan Ross’ departure from the BBC, you might have expected the broadcaster to replace him with a sensible, toe-the-line type.

Woosy’s Friday night chat show has been taken over by the far from shy Graham Norton, who has dipped his toes in controversial waters once or twice himself.
So when Buzz magazine ask us to design a T-shirt for Graham that reads:’Here Comes Trouble’, he not only gets the joke, he grabs it, runs with and crashes over the finishing line.
The custom made T-shirt for Graham was put together in two days from start to finish, it started with an exasperated phone call from the producers at Buzz Magazine who had spent the whole day trying to find a company to make these sparkly rhinestone special shirts. 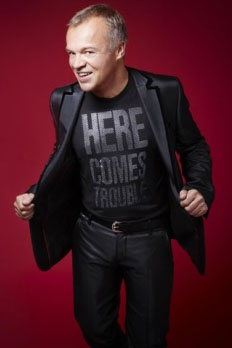 With over 4,500 stones in each shirt, they were painstakingly put together to produce a stunning and definitely, in your face design for Graham to wear.
At 47 years old, Graham has all the character and certainly a trim physic to carry it off. We doubt he will be lending his shirts to anyone else either, but perhaps he should, if he invites Sharon Osbourne onto his show again. After her infamous moment last year on Graham’s show when she bubbled up in hatred, over her younger X Factor co-judge Danni Minogue. Sharon’s impression of Danni was jaw dropping , when she pointed to her backside, it was event TV.

“It was an extraordinary moment,” Graham says. “I thought it was very funny, but I ended up feeling a little bad for Danni, even though I started it. It just took off.

So keep our number handy Graham, you may just need another customised design to get across you message – maybe the next one should say ‘Host with the Most’, as he certainly will have.
Not only has he scooped the Friday night TV show, but also the Saturday morning Radio 2 programme.

Good Luck Graham, though we doubt that you will need it as you really are a very sparkly guy!

Behind the Scenes Cover Shoot