The Outdoors Show is a massive event held annually every March.

Once again JeaP was proud to provide the England & Wales Mountain Rescue Display Team with their show uniform. Mountain Rescue work in conjunction with Victorinox – maker of the famous Swiss Army Knife – they needed to be seen so bright red shirts with bold embroidery & print were the answer.

As the guys would be swinging in from the exhibition rafters, the shirts needed to be visual & bright, as you can see we fitted the brief and the lads were not to be missed.

Did you know: In 1884, master cutler Karl Elsener, founder of Victorinox, opened a small cutlery workshop in the village of Ibach-Schwyz in Switzerland, before designing and developing the legendary Swiss Army Knife in 1897.
The name ‘Victorinox’ originates from a combination of the name of Karl Elsener’s mother, Victoria (who helped Karl to open his cutlery workshop in 1884), and the abbreviation for Stainless Steel (Inox)
Over the last 125 years Victorinox has become a universally recognised symbol of high quality Swiss craftsmanship and multi-functionality. http://www.victorinox.com 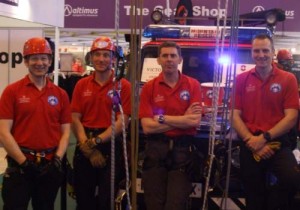 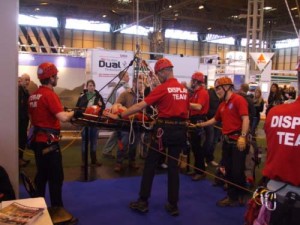 Remember when climbing – No matter how experienced or careful you are, in the blink of an eye you can find yourself in need of rescue – your life in the hands of a rescue team. And, should you be unfortunate enough to need our help, you’ll receive a professional, world-class service – from a group of highly trained, highly motivated individuals. http://www.mountain.rescue.org.uk/